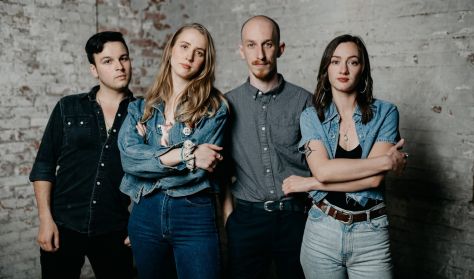 “The last few years have been about learning who we are,” says Upstate bassist Harry D’Agostino. “We’ve been knocking off milestone after milestone on the road, and as the touring’s snowballed, I feel like we’ve really come into our own. It’s been a process of discovering our identity.”

It’s an identity that’s undergone a radical evolution in the last few years, as Upstate’s sound, lineup, and even their name have all been through a metamorphosis. Those changes have culminated in the band’s dazzling new album, a collection that showcases both their remarkable growth and their adventurous blend of folk, R&B jazz, gospel, and rock and roll. The record is the sextet’s first release with new member Allison Olender (vocals), their first with four contributing songwriters, and their first since shortening their name from Upstate Rubdown. It’s also their first project to be produced by Wood Brothers percussionist Jano Rix, who helped the group embrace their transformation without sacrificing any of the gorgeous three-part harmonies, eclectic arrangements, and unforgettable performances that have defined the band since their earliest days.

“We were always the kind of artists who felt like we could go anywhere and do anything with our music,” says vocalist Mary Kenney, “but Jano just gave us a musical palette that totally opened us up. He grew up near us in Nyack, too, so he’s our people.”