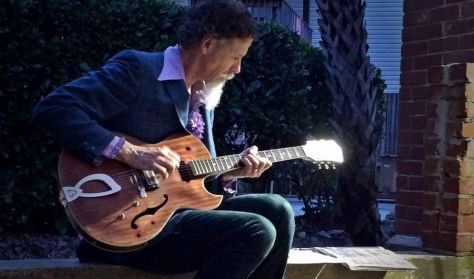 From 1991-99, Parks performed in the alternative-folk duo The Nudes with Stephanie Winters.…

No program is currently running.

From 1991-99, Parks performed in the alternative-folk duo The Nudes with Stephanie Winters. The Nudes released three albums: The Nudes (1993), Velvet Sofa (1996),[1] and Boomerang (1998), and licensed recordings to an HBO series. Billboard magazine described the duo's first CD as unlike "anything else on the airwaves."[2] The Nudes reunited under "Stephanie Winters and Walter Parks" to perform a reunion show at Grace Church in September 2017.[3]

When Parks was not touring with Havens, he formed low country blues band, Swamp Cabbage, 2003 to present.[5] The band has released three studio recordings, HONK, SQUEAL, JIVE and one live recording.

In 2011 Parks worked with the Florida Ballet on a joint project "Ballet de Marais" that debuted October 1, 2011 in Jacksonville, FL.[6] 2015-2016 Parks researched music coming out of the Okefinokee Swamp in the 1940s and created a one-man show called "Swamp By Chandelier"[7]